Athena Baptist Church held its first Sunday service on Nov. 13, 1890 with an attendance of just 5 people. Called officially "The First Baptist Church of Athena", it was not the first baptist church to exist in Athena. The Baptist church that previously met in Athena moved to Adams when the people of that town offered to build the church a new building. The Baptist churches in Adams and Weston, neither of which are still in existence today, were instrumental in helping organize another Baptist church here. By the end of the winter of 1890-91, the church had almost doubled in size, having a membership of 9.

At the time of our founding, the Christian church and a Methodist church had already been established. The Christian church offered to allow the new congregation to meet in its building. The offer was accepted and the Baptist church began to meet there. On June 22, 1891 the church received a building site as a gift from Thomas Kirk. The donated plot was exchanged, along with an additional $50, for the property where the church sits now. Lumber was donated and an additional $128.50 spent to build the first building of the Athena Baptist Church which was completed in Dec. of 1892. 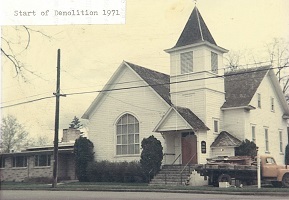 The picture here is the original church building (shown with the 1957 addition). In 1957, primarily due to the need for more educational classrooms, the church added 15 rooms, a kitchen, and a large multipurpose room which is still called “The Fireside Room.” The addition was completed at a cost of $38,301 and was dedicated on Sep. 27, 1957.

The building of a new sanctuary became a priority in the early 1970's and quickly completed. The current sanctuary building was dedicated on April 16, 1972. The bell from the old church was retained and put into a bell tower outside of the new building where it still rings to this day.

Athena Baptist Church has a long and rich legacy. More detailed information about the church's history can be obtained from the church office. The church is founded on the truth of the gospel of Jesus Christ, for it is the power of God for salvation to everyone who believes (Rom. 1:16). We are committed to the Glory of God in salvation by grace alone, through faith alone, in Christ alone, as revealed to mankind in Scripture alone.